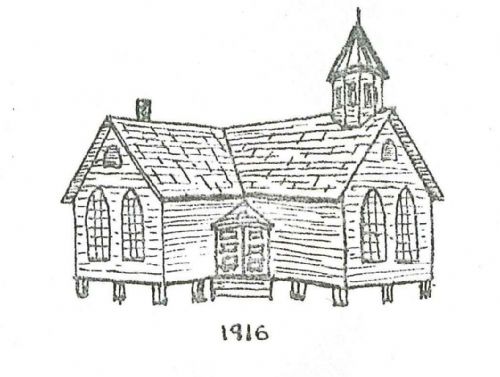 In the early nineteen hundreds, neighbors gathered and discussed the need for a church in which to worship. In July of 1915 a brush arbor was erected and a revival held. This successful meeting brought about the decision to organize a church.

The name “Center View” was chosen since it was located near the center of all the surrounding Baptist churches. We have since used the name to indicate our devotion to Christ. He is the Center of our view and our new motto reflects our desire … “Jesus Christ exalted by us and because of us”.

Construction began on the new church house early in 1916 with the first service being held in it the fall of the same year. It was dedicated the fifth Sunday in March 1918.

Sometime during the 1920’s a new sand clay road was built from Maiden to Denver, which went in back of the church. Not wanting to have the churches back to the road it was turned on Monday, August 26, 1928, to face the road.

The church needed repairs from being turned around and a committee was appointed on January 20, 1934 to look into either fixing it or building a new one. They decided to do minor repairs and start a new church as soon as the money could be raised. On March 17, 1934 a building fund was started; on Wednesday night, February 16, 1935, a Building Committee was appointed. August 2, 1935 the church voted to build a new church to the east end of the old one. The members donated timber and time, completing the church in the fall of 1936. It was paid for the fall of 1937 and dedicated the same winter.

The church voted on March 6, 1966 to accept the plans of the Building Committee for a church parsonage. It was built and ready for occupancy in the fall of 1966.

On January 6, 1997 a committee started plans for an Education Building. The groundbreaking ceremony was held on January 24, 1999 with the new building housing classrooms for infants and children, offices for the pastor and staff and a new library.

In November 1999 a committee was elected to research the need for a Preschool program. It was recommended to the church and on August 9, 2000 Center View held its first day of Preschool.

This is only a brief summary with a few important dates. From its beginning in 1915 to the present time many dedicated Pastors and members have given of their time, talents and money. As we continue to grow we will strive to be a church which exalts the name of Jesus Christ by our choices, a church that will love Him supremely and follow Him completely.